Dr. Margulies on the Scientific Method

“The important thing is not to stop questioning… Never lose a holy curiosity.” –Albert Einstein

Welcome to Fascinating Education. My name is Sheldon Margulies. I am a practicing neurologist in Silver Spring, Maryland, and the author of Everyday Doctoring and The Fascinating Body, two books that explain how the human body works and how doctors figure out what’s wrong when it doesn’t. Fascinating Education is my way to get kids interested in science at a young age. Having taught 2500 medical students in my career, and knowing what I know about the brain; I have no doubt that even youngsters can begin learning chemistry and biology, and with a little math background, even physics. They’re already excited about science; it just needs to be explained in a way that makes sense. 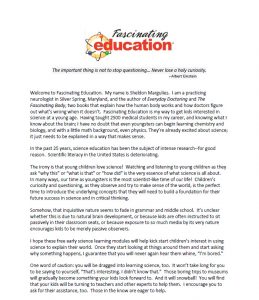 In the past 25 years, science education has been the subject of intense research–for good reason. Scientific literacy in the United States is deteriorating. The irony is that young children love science! Watching and listening to young children as they ask “why this” or “what is that” or “how did” is the very essence of what science is all about. In many ways, our time as youngsters is the most scientist-like time of our life! Children’s curiosity and questioning, as they observe and try to make sense of the world, is the perfect time to introduce the underlying concepts that they will need to build a foundation for their future success in science and in critical thinking.

Somehow, that inquisitive nature seems to fade in grammar and middle school. It’s unclear whether this is due to natural brain development, or because kids are often instructed to sit passively in their classroom seats, or because exposure to so much media by its very nature encourages kids to be merely passive observers. I hope these free early science learning modules will help kick start children’s interest in using science to explain their world. Once they start looking at things around them and start asking why something happens, I guarantee that you will never again hear them whine, “I’m bored.”

One word of caution: you will be dragged into learning science, too. It won’t take long for you to be saying to yourself, “That’s interesting. I didn’t know that.” Those boring trips to museums will gradually become something your kids look forward to. And it will snowball! You will find that your kids will be turning to teachers and other experts to help them. I encourage you to ask for their assistance, too. Those in the know are eager to help.

Using this methodology, and beginning with the simplest of observations, we think that even 3rd, 4th, and 5th graders can be introduced to chemistry. Research has shown that children entering kindergarten are already thinking about their world using complex reasoning in surprisingly subtle and sophisticated ways. Primary school students should be able to understand why the sun moves in the sky; why there are four seasons; how the earth, along with every other planet, revolves around the sun; and that stars in the night sky are simply huge spheres of glowing gas, much like our own sun.

By building on what they know about the solar system conceptually, it’s only a short stretch to the structure of the atom. Getting children to speculate about what would happen if electrons flowed onto their bodies, and getting them to appreciate that electrons repel each other because they have a negative electrical charge and are attracted to things with positive electrical charges, are perfect ideas to show in classroom demonstrations. Comparing electrical forces to magnetic forces should be great fun, too. By slicing the information thinly, and presenting it in a slow, methodical fashion, Fascinating Chemistry avoids any gaps in logic. When students advance like this, one step at a time, it’s not long before they realize that not only do they know a lot of chemistry, more importantly, they want to learn more.

Starting early helps create a love of science in your child that will pay great dividends later. Helping them to understand the most basic concepts will lay the perfect foundation for those more abstract concepts they will encounter later in life. I promise that if you nurture those curiosity questions now and help your children to observe and question, success in their later science coursework can almost be guaranteed.

Fascinating Education currently offers three science curricula: chemistry, biology, and physics. I recommend learning chemistry before biology, because so much of biology is chemistry. Yes, there is considerable math in chemistry, but once the underlying principles of chemistry are understood, the math is straightforward. There are no complicated formulas in chemistry as you might find in physics.

I recommend leaving physics for the end, but keeping in mind that science education is never truly linear, because the three basic sciences are too interconnected. Each discipline relies in one way or another on an understanding of the other two disciplines. What ties them together, though, is the scientific method, and that’s why I would like your child to begin his or her exploration of science with our Introduction to Science.

Try it yourself at https://fascinatingeducation.com/fascinating-education-an-intro/

What the Educators say

Most authorities agree that students today desperately need math and science to work and live in our ever increasingly technical world. Many recent calls for improvements in K-12 science education have focused on the need for science and engineering professionals to keep the United States competitive in the international arena. Although there is little doubt that this need is genuine, a compelling case can also be made that understanding science, technology, and engineering, now more than ever, is essential for every American citizen. Science, technology, and engineering permeate all aspects of modern life, so much so that a modicum of knowledge in these fields is required just to get by. How, for example, do you make informed decisions about your doctor’s recommendations for medical treatment without a basic understanding of anatomy and physiology? Learning science is important for everyone, even for those whose careers do not fall in the “scientific” realm.

The Scientific Method – a Fascinating Approach…

The scientific method is one type of critical thinking, consisting of a series of steps to help decide why something happens. Other types of critical thinking are used when prioritizing a list of options, or when drawing conclusions based on a set of data.

So what is the Scientific Method?

The scientific method begins with an observation that raises a question. The observation can be something you see, or anything your senses detect. The question you pose may have a number of possible explanations, called hypotheses, and your job as a scientist is to consider each possible hypothesis and think of something that would happen if the hypothesis were true. You then design an experiment to find your prediction.

Even when experiments are designed properly so that the results can only be attributed to one thing, the results of your experiments only provide evidence supporting your hypothesis. The data never prove the hypothesis to absolute certainty. Don’t be disappointed; nothing in life is certain, and the earlier kids realize this, the better.
The uncertainty in life is what makes life so much fun because it allows us to question everything around us. Why leaves turn brown, why things have color, why the sun is hot, why it’s dangerous to look directly at the sun, why doctors give shots, why anything – it’s all fair game for the scientific mind. Nothing is too trivial, and nothing is as apparent as you think.

Uncertainty brings unpredictability, so keeps your eyes open for things that don’t make sense. Many of the most startling discoveries in science have been accidental. It’s not unusual for “Hmmmm, that’s odd…..” to be the beginning of some new discovery.

Why can’t we capture energy from the sun more efficiently? What is the physics of light that makes the energy in light so elusive?

How come when I cook a turkey the white meat always comes out so dry? How can I spark up this barbecue sauce? Why is my bread so flat? It’s all kitchen chemistry.

If we’re going to clean up our air and water, if we’re going to provide enough food to feed the world, if we’re going to make use of our oceans, and if we’re going to save animals and other life forms from becoming extinct; we need to understand the chemistry, biology, and physics of whatever is creating the problem. There is an answer, but instead of finding the answer, we may have to create one. It won’t happen without science; because the problems of the world cannot be wished away, legislated around, or commanded to stop.

In short, the study of science is important, but also fun and fascinating. If our Fascinating Education website helps kids get interested and inspired to pursue science, we’ve done our job. Let us hear from you anytime!